Relational data with a spatial embedding and depicted as node-link diagram is very common, e.g., in neuroscience, and edge bundling is one way to increase its readability or reveal hidden structures. This article presents a 3D extension to kernel density estimation-based edge bundling that is meant to be used in an interactive immersive analysis setting. This extension adds awareness of the edges’ direction when using kernel smoothing and thus implicitly supports both directed and undirected graphs. The method generates explicit bundles of edges, which can be analyzed and visualized individually and as sufficient as possible for a given application context, while it scales linearly with the input size.

Tracking the temporal evolution of features in time-varying data remains a combinatorially challenging problem. A recent method models event detection as a maximum-weight independent set problem on a graph representation of all possible explanations [35]. However, optimally solving this problem is NP-hard in the general case. Following the approach by Schnorr et al., we propose a new algorithm for event detection. Our algorithm exploits the modelspecific structure of the independent set problem. Specifically, we show how to traverse potential explanations in such a way that a greedy assignment provides reliably good results. We demonstrate the effectiveness of our approach on synthetic and simulation data sets, the former of which include ground-truth tracking information which enable a quantitative evaluation. Our results are within 1% of the theoretical optimum and comparable to an approximate solution provided by a state-of-the-art optimization package. At the same time, our algorithm is significantly faster.


Influence of Directivity on the Perception of Embodied Conversational Agents' Speech 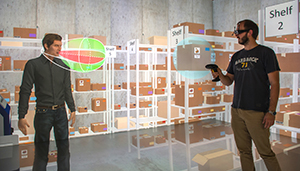 Embodied conversational agents become more and more important in various virtual reality applications, e.g., as peers, trainers or therapists. Besides their appearance and behavior, appropriate speech is required for them to be perceived as human-like and realistic. Additionally to the used voice signal, also its auralization in the immersive virtual environment has to be believable. Therefore, we investigated the effect of adding directivity to the speech sound source. Directivity simulates the orientation dependent auralization with regard to the agent's head orientation. We performed a one-factorial user study with two levels (n=35) to investigate the effect directivity has on the perceived social presence and realism of the agent's voice. Our results do not indicate any significant effects regarding directivity on both variables covered. We account this partly to an overall too low realism of the virtual agent, a not overly social utilized scenario and generally high variance of the examined measures. These results are critically discussed and potential further research questions and study designs are identified. 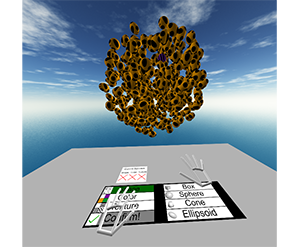 In this work we evaluate the impact of passive haptic feedback on touch-based menus, given the constraints and possibilities of a seated, desk-based scenario in VR. Therefore, we compare a menu that once is placed on the surface of a desk and once mid-air on a surface in front of the user. The study design is completed by two conditions without passive haptic feedback. In the conducted user study (n = 33) we found effects of passive haptics (present vs- non-present) and menu alignment (desk vs. mid-air) on the task performance and subjective look & feel, however the race between the conditions was close. An overall winner was the mid-air menu with passive haptic feedback, which however raises hardware requirements. 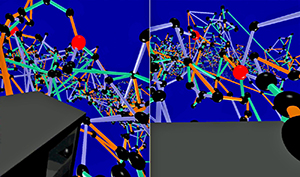 The ongoing migration of HMDs to the consumer market also allows the integration of immersive environments into analysis workflows that are often bound to an (office) desk. However, a critical factor when considering VR solutions for professional applications is the prevention of cybersickness. In the given scenario the user is usually seated and the surrounding real world environment is very dominant, where the most dominant part is maybe the desk itself. Including this desk in the virtual environment could serve as a resting frame and thus reduce cybersickness next to a lot of further possibilities. In this work, we evaluate the feasibility of a substitution like this in the context of a visual data analysis task involving travel, and measure the impact on cybersickness as well as the general task performance and presence. In the conducted user study (n=52), surprisingly, and partially in contradiction to existing work, we found no significant differences for those core measures between the control condition without a virtual table and the condition containing a virtual table. However, the results also support the inclusion of a virtual table in desk-based use cases. 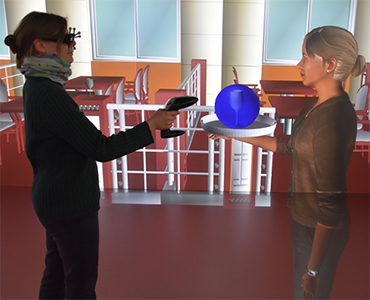 When designing the behavior of embodied, computer-controlled, human-like virtual agents (VA) serving as temporarily required assistants in virtual reality applications, two linked factors have to be considered: the time the VA is visible in the scene, defined as presence time (PT), and the time till the VA is actually available for support on a user’s calling, defined as approaching time (AT).

Complementing a previous research on behaviors with a low VA’s PT, we present the results of a controlled within-subjects study investigating behaviors by which the VA is always visible, i.e., behaviors with a high PT. The two behaviors affecting the AT tested are: following, a design in which the VA is omnipresent and constantly follows the users, and busy, a design in which theVAis self-reliantly spending time nearby the users and approaches them only if explicitly asked for. The results indicate that subjects prefer the following VA, a behavior which also leads to slightly lower execution times compared to busy. 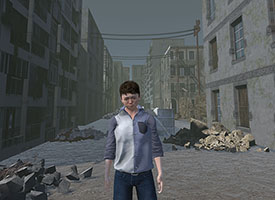 Technological innovations have a growing relevance for charitable donations, as new technologies shape the way we perceive and approach digital media. In a between-subjects study with sixty-one volunteers, we investigated whether a higher degree of immersion for the potential donor can yield more donations for non-governmental organizations. Therefore, we compared the donations given after experiencing a video-based, an augmented-reality-based, or a virtual-reality-based scenery with a virtual agent, representing a war victimized Syrian boy talking about his losses. Our initial results indicate that the immersion has no impact. However, the donor’s perceived innovativeness of the used technology might be an influencing factor. 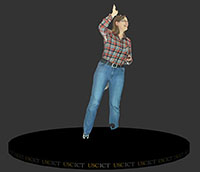 Volumetric video can be used in virtual and augmented reality applications to show detailed animated performances by human actors. In this paper, we describe a volumetric capture system based on a photogrammetry cage with unsynchronized, low-cost cameras which is able to generate high-quality geometric data for animated avatars. This approach requires, inter alia, a subsequent synchronization of the captured videos.

Many applications in the realm of social virtual reality require reasonable locomotion patterns for their embedded, intelligent virtual agents (VAs). The two main research areas covered in the literature are pure inter-agent-dynamics for crowd simulations and user-agent-dynamics in, e.g., pedestrian scenarios. However, social locomotion, defined as a joint locomotion of a social group consisting of a human user and one to several VAs in the role of accompanying interaction partners, has not been carefully investigated yet. I intend to close this gap by contributing locomotion models for the social group’s VAs. Thereby, I plan to evaluate the effects of the VAs’ locomotion patterns on a user’s perceived degree of immersion, comfort, and social presence.