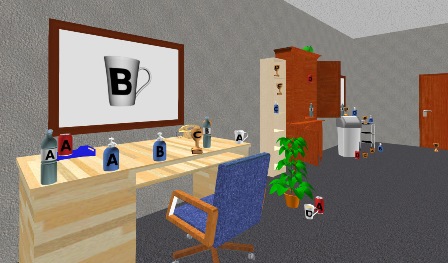 When moving through a tracked immersive virtual environment, it is sometimes useful to deviate from the normal one-to-one mapping of real to virtual motion. One option is the application of rotation gain, where the virtual rotation of a user around the vertical axis is amplified or reduced by a factor. Previous research in head-mounted display environments has shown that rotation gain can go unnoticed to a certain extent, which is exploited in redirected walking techniques. Furthermore, it can be used to increase the effective field of regard in projection systems. However, rotation gain has never been studied in CAVE systems, yet. In this work, we present an experiment with 87 participants examining the effects of rotation gain in a CAVE-like virtual environment. The results show no significant effects of rotation gain on simulator sickness, presence, or user performance in a cognitive task, but indicate that there is a negative influence on spatial knowledge especially for inexperienced users. In secondary results, we could confirm results of previous work and demonstrate that they also hold for CAVE environments, showing a negative correlation between simulator sickness and presence, cognitive performance and spatial knowledge, a positive correlation between presence and spatial knowledge, a mitigating influence of experience with 3D applications and previous CAVE exposure on simulator sickness, and a higher incidence of simulator sickness in women.