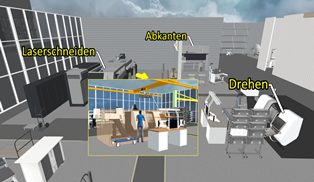 The act of note-taking is an essential part of the data analysis process. It has been realized in form of various annotation systems that have been discussed in many publications. Unfortunately, the focus usually lies on high-level functionality, like interaction metaphors and display strategies. We argue that it is worthwhile to also consider software engineering aspects. Annotation systems often share similar functionality that can potentially be factored into reusable components with the goal to speed up the creation of new annotation systems. At the same time, however, VR-centered annotation systems are not only subject to application-specific requirements, but also to those arising from differences between the various VR platforms, like desktop VR setups or CAVEs. As a result, it is usually necessary to build application-specific VR-centered annotation systems from scratch instead of reusing existing components.

To improve this situation, we present a framework that provides reusable and adaptable building blocks to facilitate the creation of flexible annotation systems for VR applications. We discuss aspects ranging from data representation over persistence to the integration of new data types and interaction metaphors, especially in context of multi-platform applications. To underpin the benefits of such an approach and promote the proposed concepts, we describe how the framework was applied to several of our own projects.