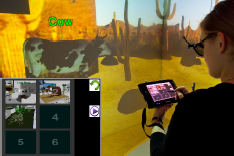 Guided tours have been found to be a good approach to introducing users to previously unknown virtual environments and to allowing them access to relevant points of interest. Two important tasks during the creation of guided tours are the definition of views onto relevant information and their arrangement into an order in which they are to be visited. To allow a maximum of flexibility an interactive approach to these tasks is desirable. To this end, we present and evaluate two approaches to the mentioned interaction tasks in this paper. The first approach is a hybrid 2D/3D interaction metaphor in which a tracked tablet PC is used as a virtual digital camera that allows to specify and order views onto the scene. The second one is a purely 3D version of the first one, which does not require a tablet PC. Both approaches were compared in an initial user study, whose results indicate a superiority of the 3D over the hybrid approach.