When Spatial Devices are not an Option : Object Manipulation in Virtual Reality using 2D Input Devices 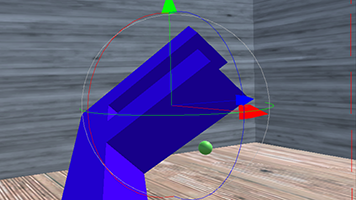 With the advent of low-cost virtual reality hardware, new applications arise in professional contexts. These applications have requirements that can differ from the usual premise when developing immersive systems. In this work, we explore the idea that spatial controllers might not be usable for practical reasons, even though they are the best interaction device for the task. Such a reason might be fatigue, as applications might be used over a long period of time. Additionally, some people might have even more difficulty lifting their hands, due to a disability. Hence, we attempt to measure how much the performance in a spatial interaction task decreases when using classical 2D interaction devices instead of a spatial controller. For this, we developed an interaction technique that uses 2D inputs and borrows principles from desktop interaction. We show that our interaction technique is slower to use than the state-of-the-art spatial interaction but is not much worse regarding precision and user preference.