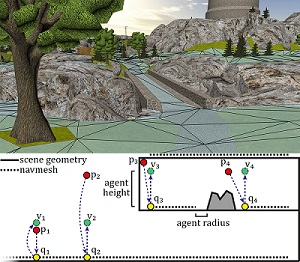 Scene visibility - the information of which parts of the scene are visible from a certain location—can be used to derive various properties of a virtual environment. For example, it enables the computation of viewpoint quality to determine the informativeness of a viewpoint, helps in constructing virtual tours, and allows to keep track of the objects a user may already have seen. However, computing visibility at runtime may be too computationally expensive for many applications, while sampling the entire scene beforehand introduces a costly precomputation step and may include many samples not needed later on.

Therefore, in this paper, we propose a novel approach to precompute visibility information based on navigation meshes, a polygonal representation of a scene’s navigable areas. We show that with only limited precomputation, high accuracy can be achieved in these areas. Furthermore, we demonstrate the usefulness of the approach by means of several applications, including viewpoint quality computation, landmark and room detection, and exploration assistance. In addition, we present a travel interface based on common visibility that we found to result in less cybersickness in a user study.