Turning Anonymous Members of a Multiagent System into Individuals 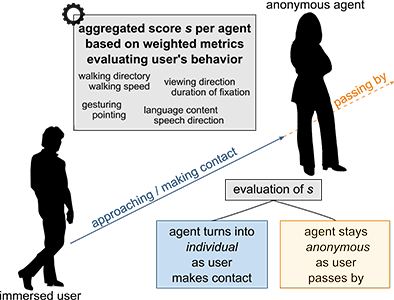 It is increasingly common to embed embodied, human-like, virtual agents into immersive virtual environments for either of the two use cases: (1) populating architectural scenes as anonymous members of a crowd and (2) meeting or supporting users as individual, intelligent and conversational agents. However, the new trend towards intelligent cyber physical systems inherently combines both use cases. Thus, we argue for the necessity of multiagent systems consisting of anonymous and autonomous agents, who temporarily turn into intelligent individuals. Besides purely enlivening the scene, each agent can thus be engaged into a situation-dependent interaction by the user, e.g., into a conversation or a joint task. To this end, we devise components for an agent’s behavioral design modeling the transition between an anonymous and an individual agent when a user approaches.