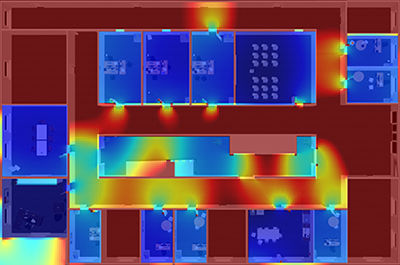 When traveling virtually through large scenes, long distances and different detail densities render fixed movement speeds impractical. However, to manually adjust the travel speed, users have to control an additional parameter, which may be uncomfortable and requires cognitive effort. Although automatic speed adjustment techniques exist, many of them can be problematic in indoor scenes. Therefore, we propose to automatically adjust travel speed based on viewpoint quality, originally a measure of the informativeness of a viewpoint. In a user study, we show that our technique is easy to use, allowing users to reach targets faster and use less cognitive resources than when choosing their speed manually.