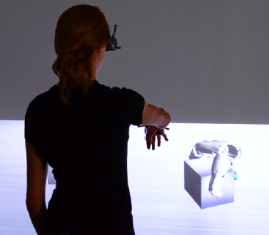 Weight perception in virtual environments generally can be achieved with haptic devices. However, most of these are hard to integrate in an immersive virtual environment (IVE) due to their technical complexity and the restriction of a user's movement within the IVE. We describe two simple methods using only a wireless light-weight finger-tracking device in combination with a physics simulated hand model to create a feeling of heaviness of virtual objects when interacting with them in an IVE. The first method maps the varying distance between tracked fingers and the thumb to the grasping force required for lifting a virtual object with a given weight. The second method maps the detected intensity of finger pinch during grasping gestures to the lifting force. In an experiment described in this paper we investigated the potential of the proposed methods for the discrimination of heaviness of virtual objects by finding the just noticeable difference (JND) to calculate the Weber fraction. Furthermore, the workload that users experienced using these methods was measured to gain more insight into their usefulness as interaction technique. At a hit ratio of 0.75, the determined Weber fraction using the finger distance based method was 16.25% and using the pinch based method was 15.48%, which corresponds to values found in related work. There was no significant effect of method on the difference threshold measured and the workload experienced, however the user preference was higher for the pinch based method. The results demonstrate the capability of the proposed methods for the perception of heaviness in IVEs and therefore represent a simple alternative to haptics based methods.